As you know next Sunday is our annual meeting and copies of the report are available, please take one, read it and come ready to participate after the service next week!  I’ve enjoyed reading the reports and one caught my eye, from the scouts: Ian writes about how camping gives boys new experiences, especially breakfast!   Spreading stuff on your toast is a skill many of us in adult life take for granted…. But where did we learn how to do it? For this young generation it seems it is when away with the 61st for the first time. The damage seen on the first morning has to be seen to be believed. Butter in the jam, jam in the butter and EVERYTHING all over everything else. By day two things are better and by the second weekend away, most of our young people are experts. What would the world’s breakfast table be like without Scouting! What indeed…

Today’s gospel happens at breakfast time.  It is said that breakfast is the most important meal of the day… the meal after a wedding is often called the wedding breakfast, the first meal after the marriage.  Our own parish breakfast I guess derives from the tradition of fasting before communion… perhaps some here still keep that discipline, but I think it only really works with early services…  nonetheless, today’s gospel reading draws our attention to the importance of a meal at the break of the day, when the disciples saw the risen Christ.

Paul had a dramatic vision on the Damascus road.  Few of us have had this kind of experience… and so our collect prayer is keenly felt, “give us such knowledge of his presence with us, that we may be strengthened and sustained by his risen life and see you continually in righteousness and truth”.  Knowledge of the presence of the risen Christ will affect how we live.

Careful listeners last week will have heard the end of chapter 20…. Now Jesus did many other signs in the presence of his disciples, which are not written in this book. But these are written so that you may come to believe that Jesus is the Messiah, the Son of God, and that through believing you may have life in his name.

Chapter 21 is thought to be a later addition… possibly as a restoration of Peter…. notice the charcoal fire reminding us of the high priest’s courtyard and the three questions which invite Peter to declare his love of Jesus, replacing his threefold denial, and thus restoring him.  Other elements of the story are resonant…  they’re fishing, there’s a miraculous draught of fishes after the bidding of a stranger… and a prediction of suffering.

So here’s how we find the risen Christ…. (1) at the margins….. edge of sea, (2) in the mundane, and (3) in facing the truth about ourselves, even (or especially) when that hurts, for forgiveness and reconciliation are at the heart of the resurrection.

We read that Peter was “hurt” when Jesus asked him the third time if he loved him. The Greek word (elupethe) means to grieve, cause sadness… used even of pain of childbirth in the Greek translation of the OT (Genesis 3:16).  Why was he so hurt….? Look closely at the Greek….  twice Jesu asks agapeis me, and twice Peter says phileo, then Jesus downgrades the question to phileis me, and then Peter is grieved, for he sees that Jesus has reduced his expectation….  The uncomfortable truth is that God knows we’re not much capable of the ultimate sacrifice….. and yet he calls us to do what we can and loves us in spite of our weakness.

This is what the collect means by living in righteousness and truth, accepting the truth about ourselves and then getting on with loving our neighbours.  Real humility means being taken where we do not want to go… as Jesus says to Peter… But when you grow old, you will stretch out your hands, and someone else will fasten a belt around you and take you where you do not wish to go.’ (He said this to indicate the kind of death by which he would glorify God.) After this he said to him, ‘Follow me.’

An opportunity to do this is Christian Aid’s latest campaign The Big Brekkie.  You’ll see on the newssheet that CA week is approaching and there is a meeting this week, all welcome, to plan…. I know that there are mixed feelings about undertaking the street collection but I want to challenge us to engage with is as fully as we can because one of the ways in which we witness to the resurrection, our belief in life without barriers, is being ready to invite people to recognize that the call to love our neighbours is not just the people who live next door or down the street, but people elsewhere.  This year’s campaign is focused on Bangladesh, and the inhabitants of the region of Brahmaputra river, part of the drainage basin of the Himalayas.  Their website features Morsheda, a young mother of four living in Bangladesh. She has no land, few assets and no savings. And no matter how hard she works, she can’t escape the floods that constantly threaten to destroy her home.  Just £250 is enough to flood-proof Morsheda’s home, raising it eight foot on an earth plinth so that she has a safe place to rebuild. It could also buy a goat, seeds and a wormery to produce compost, giving her a long-term income.  ‘If I could raise my house then I would feel much safer living here with my children.’  Could we raise that at breakfast?

These are people living not beside the sea, but at water’s edge with great uncertainty. In a  world where the news is dominated by investments of the super-rich, it still takes people of modest means, ourselves, to demonstrate what love truly means, and I think Christian Aid, the delivery of the envelope and the invitation to give, is an act of witness, even if it is rebuffed.  At our planning meeting I hope we can develop a strategy to encourage us to do this in our patch. But in the meantime, Christian Aid is also offering a way for churches to raise a sum of money themselves, using breakfast.. and so I hope we might get this vision and use our parish breakfast on Sunday 15th May to hold a Big Brekkie…. an all age event on what will be the Feast of Pentecost, to which we might like to invite our wider circle of friends and families… as an act of solidarity with the world’s poorest people, and an expression of our belief in the presence of the risen Christ.  The only thing that prevents us, like Peter, is our fearfulness and uncertainty… if we know ourselves truly loved, then we will be able to do this. That, of course, is what we are reminded of in this sacrament of holy communion…. our participation in Christ with each other, a solidarity that feeds the soul.

From Martin Luther King’s “A Christmas Sermon on Peace” (1967)

It really boils down to this: that all life is interrelated. We are all caught in an inescapable network of mutuality, tied into a single garment of destiny. Whatever affects one directly, affects all indirectly. We are made to live together because of the interrelated structure of reality. Did you ever stop to think that you can’t leave for your job in the morning without being dependent on most of the world? You get up in the morning and go to the bathroom and reach over for the sponge, and that’s handed to you by a Pacific islander. You reach for a bar of soap, and that’s given to you at the hands of a Frenchman. And then you go into the kitchen to drink your coffee for the morning, and that’s poured into your cup by a South American. And maybe you want tea: that’s poured into your cup by a Chinese. Or maybe you’re desirous of having cocoa for breakfast, and that’s poured into your cup by a West African. And then you reach over for your toast, and that’s given to you at the hands of an English-speaking farmer, not to mention the baker. And before you finish eating breakfast in the morning, you’ve depended on more than half the world. This is the way our universe is structured, this is its interrelated quality. We aren’t going to have peace on Earth until we recognize this basic fact of the interrelated structure of all reality.” 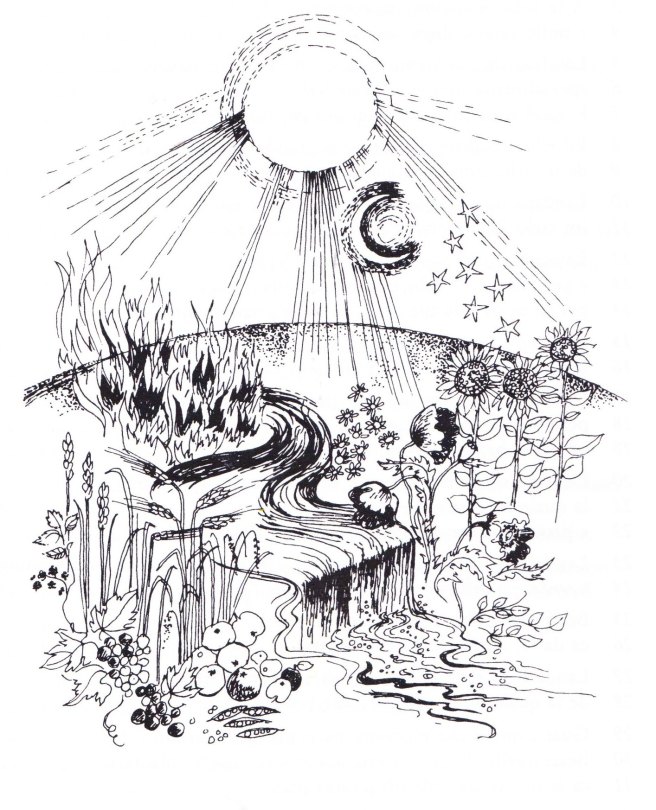 Most High, all-powerful, good Lord, yours are the praises, the glory, and the honour, and all blessing;

To You alone, Most High, do they belong, and no human is worthy to mention Your name.

Praised be You, my Lord, with all Your creatures, especially Sir Brother Sun, Who is the day and through whom You give us light.

And he is beautiful and radiant with great splendour; and bears a likeness of You, Most High One.

Praised be You, my Lord, through Sister Moon and the stars, in heaven You formed them clear and precious and beautiful.

Praised be You, my Lord, through Brother Wind, and through the air, cloudy and serene, and every kind of weather, through whom You give sustenance to Your creatures.

Praised be You, my Lord, through Sister Water, who is very useful and humble and precious and chaste.

Praised be You, my Lord, through Brother Fire, through whom You light the night, and he is beautiful and playful and robust and strong.

Praised be You, my Lord, through our Sister Mother Earth, who sustains and governs us, and who produces various fruit with coloured flowers and herbs.

Praised be You, my Lord, through those who give pardon for Your love, and bear infirmity and tribulation.

Blessed are those who endure in peace for by You, Most High, shall they be crowned.

Praised be You, my Lord, through our Sister Bodily Death, from whom no one living can escape. Woe to those who die in mortal sin.

Blessed are those whom death will find in Your most holy will, for the second death shall do them no harm.

Praise and bless my Lord and give Him thanks and serve Him with great humility.